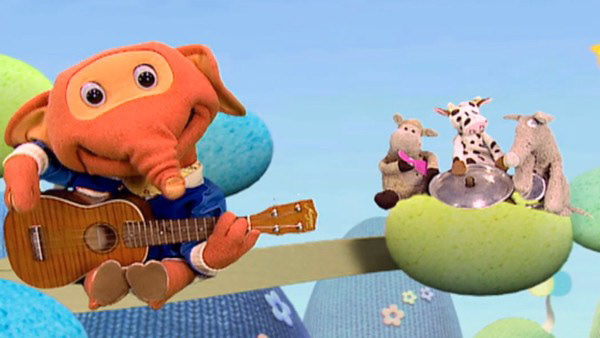 On several occations I have worked on music for this orange creature, loved by countless Norwegian children. In 2008 I worked on an arrangement of the song Ikke Redd (Not Afraid), originally written and composed by Berit Nermoen (Fantorangen in person). This song appears on the compilation album "Supersanger", released by NRK and Egmont/Barneselskapet in 2010.
In 2011 I rejoined my orange friend to make new arrangements of five classic children's songs, in a chimy, twinkly, exotic and kind of odd Fantorang world. These are (or were at least for some time) played continously on NRK Super.
Once again, I'm proud to bring the children of today LESS eurodisco glossy pink autotune pop, and MORE Steve Reich inspired plingplong patterns. It's a tough job but somebody's gotta do it.
Since the vocals here are recorded later in the virtual TV studio at the same time as recording the music video, they are - technically speaking - not a part of my mix. Therefore, the music clips below are instrumental versions (or karaoke versions if you will!).
Music: Various/trad. Arr: Eirik Myhr
Recorded March-May 2011
"Ikke Redd": Music and lyrics by Berit Nermoen, arranged by Eirik Myhr
Recorded Summer 2008
VOCALS: Berit Nermoen
GUITAR "Rock’n’roll fiskeboll": Torbjørn Alsos Raae
PIANO "Ikke Redd": Sveinung Stoveland
ALL OTHER INSTRUMENTS AND PROGRAMMING: Eirik Myhr
Client: NRK Super
Executive Producer: Anne Marie Nørholm