FAMILI GHOLAM is a totally mad sitcom for Norwegian radio, written by Bahareh Badavi and Mathias Calmeyer, directed by Mathias Calmeyer and produced by NRK Radioteatret in 2015. With a great ensemble of actors (featuring Toni Usman, Lavleen Kaur, Tonje Thwin, Assad Siddique, Johannes Joner, Anne Ryg, Andrea Bræin Hovig and Trond Høvik in the leading roles), FAMILI GHOLAM is a very silly and very funny sitcom, poking fun of everything from accountancy to terrorism.
Crafting the music for this project was a bigger challenge than I first anticipated. Yes, there should be themes, but there's not really a lot of place for music, other than very short cues telling us about a change in the scene, like when moving from one room to another, or a passage of time (in true sitcom fashion). Yes, the family Gholam is from Iran, but the music shouldn't just try to copy Persian folk music - for the same reason that we don't simply use Norwegian folk music when describing a random fictional character from Norway. Yet the music should carry some clear indication of their cultural background, especially since there are no pictures, and the whole concept of the series and the characters are severely caricature based. It's a difficult balance for sure. Also, the billionaire Oscar Schjødt is in deep financial crisis, and his whole character is somewhat sad, and his wife Lilleba is not very bright, yet their musical themes should treat them with at least a bit of dignity. Trying to craft a rather strange mix of styles seemed like the only way out of this mess...
For the family Gholam's themes, I ended up with string melodies inspired by Persian modal scales, some Persian percussion, mixed with synth sounds inspired by 80s pop, kind of hinting at what kind of music Fahranaz and Saman Gholam (the parents) might have been listening to on their first dates, way back... Tango inspired accordion and strings, with an edgy, sorrowful trombone would portray the sad state of the very rich and snobbish family Schjødt. Some totally over the top accordion themes describing the jovial janitor Torjussen, who never gets to finish a sentence. Add to this mix a main title theme where the Norwegian and Persian inspired melodies gets mixed up in a synth pop frenzy and finds the groove together, which is my way of saying that wherever we are born in the world, we're still the same bunch of silly humans making silly mistakes, and we're not really that different.
I’m happy to say that some of Norway’s absolute best musicians are participating on this soundtrack, and they are completely "typecast" for this project and the roles the different instruments play in the story, portraying the characters. The legendary Stian Carstensen on accordion, Erik Johannessen on trombone, Harpreet Bansal on violin and Erlend Viken on fiddle. If that’s not a dream team I don’t know what is! Another big thanks to Siavash Mozzafari, who granted me an early license to use his recordings of Iranian traditional instrument performances, which were also added to the mix. 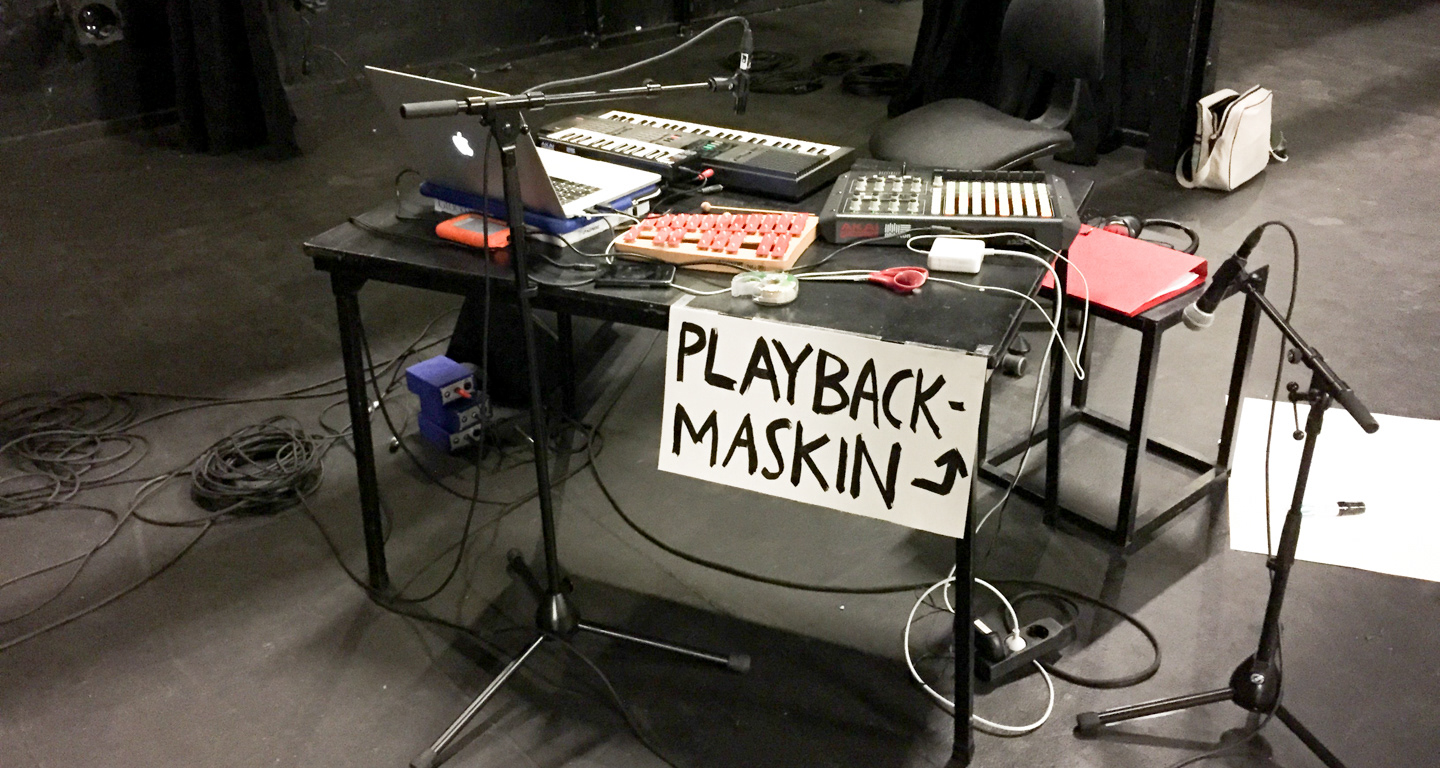 The "live stunt"
NRK Radioteatret wanted to do something special to celebrate both the premiere of FAMILI GHOLAM, and the tradition of radio dramas in general. So the whole team got together at Dramatikkens Hus and actually performed the two first episodes as *live radio theatre*. With the actors in the centre and me on the left corner, I performed the episodes' music on my Playback Machine™ (actually it was probably 10% live and 90% playback). On the right corner, Torgny G. Anderaa did a brave job of improvising foley effects.
Music by Eirik Myhr
Recorded Spring 2015
ACCORDION: Stian Carstensen
VIOLIN: Harpreet Bansal
TROMBONE: Erik Johannessen
FIDDLE: Erlend Viken
ALL OTHER INSTRUMENTS AND PROGRAMMING: Eirik Myhr
Client: NRK Radioteatret
Director: Mathias Calmeyer